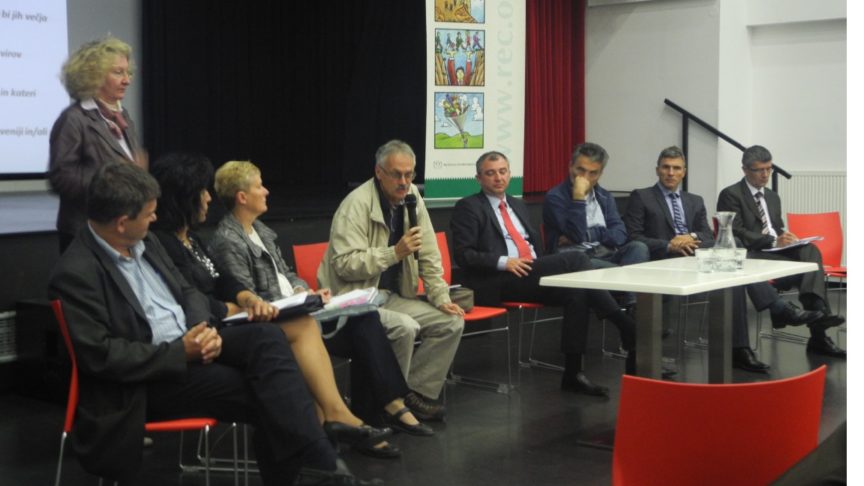 The third roundtable on emergency preparedness and response around the nuclear power plant Krsko has taken place on October, 20th. As the member of NTW REC Slovenia carried out on October 20th 2014 a round table on emergency and preparedness in case of nuclear accident in NPP Krško and its cross-border aspects. The round table took place in Brežice (Slovenia) at the border with Croatia. It was attended by 55 persons from all stakeholder groups from Slovenia and Croatia and the Slovene media.

Both countries have an equal share of equity in NPP Krško, a joint venture of two federal republics of former Yugoslavia and situated in the Slovene town of Krško, very close to the border and in the vicinity of the city of Zagreb, a capital of Croatia with about 1 million inhabitants.

The 696 MW Westinghouse designed PWR reactor that started its commercial operation in 1983 is considered as well operated in terms of safety and electricity generation and has already entered procedure to extend its design life time operation for additional 20 years, i.e. till 2043.

At the round table representatives of the NPP Krško, local communities, state, regional and local authorities from both countries presented official nuclear emergency and preparedness plans and activities. In the discussion that followed the citizens and NGOs raised their concerns regarding presumptions of the EP&R plans and asked whether in reality the plans could be implemented. Special concerns were raised on the fact that although the local people have trust in safe operation of the NPP they are- according to the public opinion surveys- poorly informed on how to behave in case of an emergency and sceptical about their chances to escape the worst even if act properly. Some issues of common concern and possible action about emergency preparedness and response have been identified:

– a lack of regular information and communication on the issue at various levels, including direct communication between the operator of the NPP and nuclear emergency authorities in Croatia

– a lack of permanent and balanced dialogue on nuclear safety, including EP&R issues, between the plant operator and authorities on the one side and citizens, independent experts and NGOs.

– Contradiction between planned evacuation of pupils in schools and kindergartens and intentions of parents to evacuate with private cars together with their children was also identified.

– Citizens also demanded transparent and clear answers regarding long term relocation and damage compensation in case of a major accident in the NPP Krško.

The round table however also identified progress in cross border cooperation. The cooperation between Slovenia and Croatia started at the end of the 90s; it has been continued in 2012 within an EU sponsored project on evacuation in a case of a nuclear accident involving Slovene towns of Krško and Brežice and the city of Zagreb.

The participants were unanimous about the necessity to organise similar events in the future to further discuss the open issues not only in Slovenia but also in the municipalities of Croatia that are situated within the emergency planning zones. It was agreed that a proper strategy for approaching local citizens need to be found. REC Slovenia will seek for possible support to link local population with authorities.