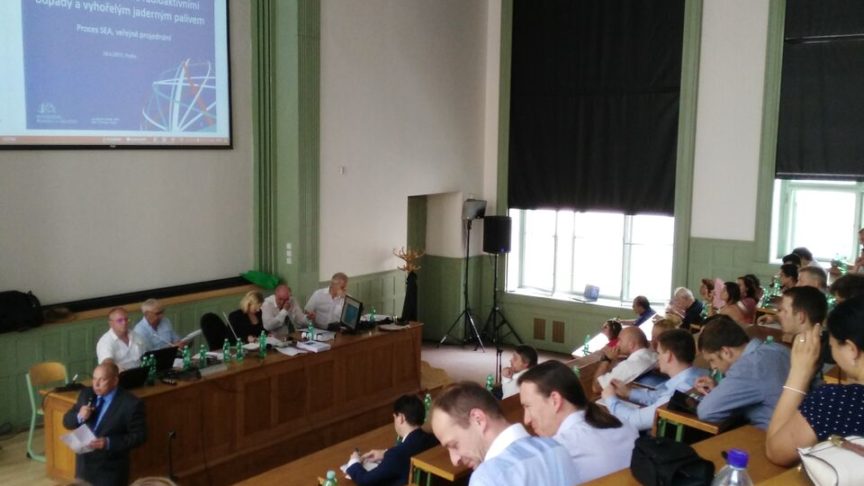 During the public hearing on Update of the National Programme on Radioactive Waste and Spent Nuclear Fuel Management in the Czech Republic and its evaluation in Prague on June 28, 2017 [1], the views of 3 foreign experts (NTW members) were communicated in cooperation with Calla – Association for Preservation of the Environment to the Czech public and the authorities. This report first briefly summarizes the main contributions of foreign contributions and then lists the follow-up responses of the Czech authorities and the SEA processor [2].

In the first contribution, Dr David Lowry of the Nuclear Waste Advisory Associates (NWAA) recommends that:

In the second contribution, Dr Paul Dorfman of the Energy Institute at University College of London:

In the third contribution, Dr Jari Natunen of the Mining Delegation of Finnish People:

Three persons responded to the topics mentioned in the contributions.

Deputy Minister of Industry and Trade (MPO) Lenka Kovačovská responded to the contributions as follows:

Mrs. Kovačovská’s opinion was in contrast with the viewpoint of Jitka Kantová, a member of the Society for the Rescue of the Church of St. Jiljí (in original “Za záchranu kostela sv. Jiljí“) in Lubenec in the Ústí nad Labem Region (the Čertovka site), who said at about 1:50:51 that the state conducted a dialogue only with those who agree with the current siting process for a deep geological repository. For illustration, she added her own experience that the mayor of her village meets with state offices on a regular basis, but she is not provided with information from meetings or invited to dialogue (note: the relevant comment was pasted at the end of the audio [2] and you can listen to it at 29:19).

– A single public hearing only in the capital: deputy minister Kovačovská said the reason for it is the MPO’s intention to have all comments in one place so that everyone has the same access to information.

Deputy minister Kovačovská also explained that the SEA process was lengthy due to translations of all the materials into the English and German languages. According to Gabriele Mraz of the Österreichisches Ökologie Institut, however, the problem is that only a non-technical summary of the evaluation was translated into German, not a summary of the national programme itself, which is only in English. Also, the deadline for sending comments within the transboundary SEA process in Austria [4] falls into summer holidays from July 4 to August 1, which is a very unusual approach for Austrian authorities. Other states than Austria, according to deputy minister Kovačovská, had not used their initiative and had not requested a cross-border SEA before 28th June.

– Insufficient evaluation of alternatives: director Slovák said that RAWRA has focused on the evaluation of concepts that are verifiable in practice, whereas, for example, the concept of deep boreholes can not be considered as such. In the United States, experiments are in the pilot project stage. The risk is 1/ in the indefinability of the geological conditions at a depth of about 3-5 km and how the material will be stored, so the safety of such storage for hundreds of thousands and millions of years can not be demonstrated, and 2 / in the operational risk of vertical release of the waste to the depth when there is no clear procedure to deal with a possible crash. On the contrary, a deep geological repository can solve all risks.

– The risks associated with groundwater assessed in the report by GeoBariéra [3]: ​​ director Slovák confirmed that the risk of losing and affecting groundwater was identified at specific repository sites. He said that evaluating the impacts of the national programme on radioactive waste management and spent nuclear fuel did not address these risks. In order to evaluate the risks in the environmental impact assessment (EIA) process, geological survey will be carried out in only two specific sites (note: the two sites are to be selected by 2020), which will demonstrate groundwater impact to a depth of 500 meters and its impact on the Earth’s surface.

–On the GeoBariéra report: SEA assessor Macháček said that this report had focused on evaluating conflicts of interest of candidate sites. Extensive exploration areas are currently being established (note: their validity expired on December 31, 2016 [5] and the whole process has become complicated [6]). For detailed geological research on two specific locations, the project will be elaborated on using more detailed information about the site and the individual phases of the project will be submitted to the EIA process. There are technical means to limit the environmental impact of geological survey. In his opinion, the assessment of the national programme is not in contradiction with the GeoBaiéra report. The EIA will also be carried out for the construction of an underground research laboratory (URL) in the final location. At that time, further updates of the national programme on radioactive waste management will also have to be developed.

On the additional comment of Olga Kališová, whether the SEA processor could clarify why the assessment of the concept is not in contradiction with the GeoBariéra report, Mr. Macháček replied that, because he would assume that this would surely be a frequent comment, the answer will be given later in a written record.

Note: During the SEA public hearing, there were also contributions from other Czech non-governmental organizations and experts involved in the radioactive waste management in a long-term, which are not mentioned in this report for capacity reasons.

[2] Audio from the public discussion “Update of the National Programme on Radioactive Waste and Spent Nuclear Fuel Management in the Czech Republic”  and its assessment on the environment in Prague on 28 June 2017 with the views of 3 foreign experts from 01:01 and Czech reactions at 09:11. Please use your headphones for better sound.

[5]Press release of Platform Against Deep Repository “Municipalities threatened by a deep geological repository have succeeded: the state must stop geological surveys in seven sites”dated March 1, 2017.