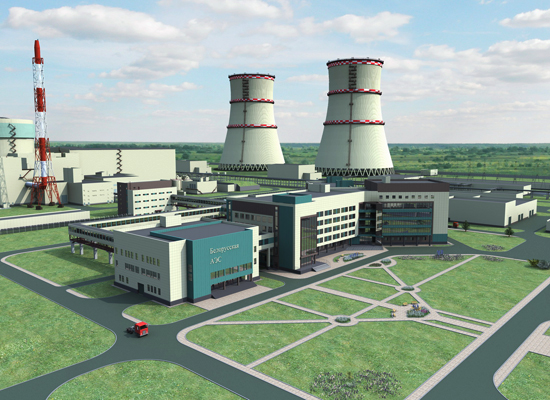 The territory of Belarus received 70% of the radioactive fallout from the Chernobyl accident. As a result, nearly 23% of its territory was contaminated. However, thirty years after the accident, Belarus is building its first nuclear power plant at Astravyets / Ostrovetsonly 20 km from the border with Lithuania. The first unit is set to become operational in 2018 with Russian assistance. But as the project advances, safety concerns are mounting. The alarming lack of transparency and safety of this project calls for an urgent reassessment.

Belarus to realise nuclear power aspirations with help from Russia
The aftermath of the 1986 Chernobyl disaster in Ukraine – which contaminated nearly a quarter of Belarus but remains a taboo subject to this day[1] – stalled Minsk’s own budding nuclear aspirations for decades.

In 2006, however, the government approved plans to build Belarus’s first NPP. Ostrovets, some 50 km east of Lithuania’s capital, was chosen as the site in 2008, confirmed by presidential decree in 2011.

In 2009, Minsk announced that Russian company Atomstroyexport would be the general contractor. The first concrete was poured in 2013. Russia is to deliver a VVER 1200 reactor by the end of 2016. It will be cooled with water from the river Neris, which flows downstream through Vilnius. The NPP first power-generating unit is scheduled for commissioning in 2018, and the second one in 2020. Two more units are proposed for operation by 2025.

Violation of international regulations
The construction of Ostrovets NPP faces international opposition on safety grounds.While all domestic opposition to the NPP is muted by Belarus’s President, Lithuania is openly accusing Belarus of violating the Espoo and Aarhus Conventions, by failing to complete an environmental impact assessment, notify Lithuania about the project and inform the public about the impact on the river Neris and on drinking water in Lithuania[2].
In July 2014, at the Ministerial Conference of the Aarhus Convention, the parties declared that the project failed to comply with the Convention’s requirements in the construction of the NPP[3]. The same year, the Implementation Committee of the Espoo Convention stated that Belarus had violated the Convention by not providing Lithuania with the information necessary to assess the possible environmental impact of the nuclear project.[4].

In March 2016, the committee suggested that an international inquiry commission help resolve the dispute. And EU Climate Action and Energy Commissioner Miguel Arias Canete supported Lithuania’s position that Belarus’ nuclear power plant under construction in Astravets, some 50km from Vilnius, must comply with all Espoo Convention and nuclear safety requirements. According to Miguel Arias Canete, the Commission will ensure that the assessment of the Astravets NPP’s impact on the environmental conditions will be properly made[5].

An accident occurred in April 2016
In early May 2016, the Belarusian Minister of Energy confirmed, under pressure from the EU, that an accident occurred a month earlier[1], on April 8, at the construction site, causing partial destruction of the structure supporting the confinement. Without any consequences according to the Belarusian authorities.

Inappropriate stress tests
Following the 2011 Fukushima nuclear accident, the European Council in March 2011 requested stress tests of all EU NPPs. In this context, the Commission undertook, with seven neighboring EU countries including Belarus, to perform stress tests in nuclear power plants in neighboring countries[2]. But apparently nothing has been done.  For its part, Belarus is committed to making these stress tests by the same company which is in charge of building the plant, Rosatom which violates an independence of expertise.

On 20 May, the Lithuanian Commissioner (EU Health and Food Safety Commissioner Vytenis Andriukaitis) pledged that European standards should be applied on the site of Ostrovets, by declaring: “the Commission will demand that Belarus review the project before switching the Astravyets plant on. The stress tests will be reviewed in Brussels as well”. The Commission has promised to put the item on the agenda of their weekly meeting in early June[3].

MEPs asked the Commission whether the Ostrovets plant complied with EU nuclear safety rules and urged it to use all available instruments to ensure that the plant undergoes proper safety stress tests. Many MEPs highlighted the cross-border nature of the issue – a nuclear fallout cannot be contained within a country’s borders – and the difficulty of verifying reports of the risks around it.

The MEP Julie Ward emphasised that “we must continuously strive for greater nuclear safety and transparency and support the civil society organisations who work in the field to advance that transparency.The nuclear power industry is a big player in the energy industry, with huge subsidies from the public purse. It therefore has a duty to work closely with host communities and Nuclear Transparency Watch to ensure that the plants are operating to the highest standards. ” Her full speech : https://www.youtube.com/watch?v=bo10AVo1B-Y&feature=youtu.be

The Commission – which played an observer role in the construction of the Ostrovets plant – said it would use all instruments available to ensure the highest safety standards. However, Commissioner Christos Stylianides also reminded Parliament that the nuclear stress tests called for by many MEPs were voluntary and a national competence. He nonetheless said that the independence of Belarusian nuclear regulators needed to be strengthened. The Commission expects the Belarus National Assessment Report on the plant to be presented in 2016/17.