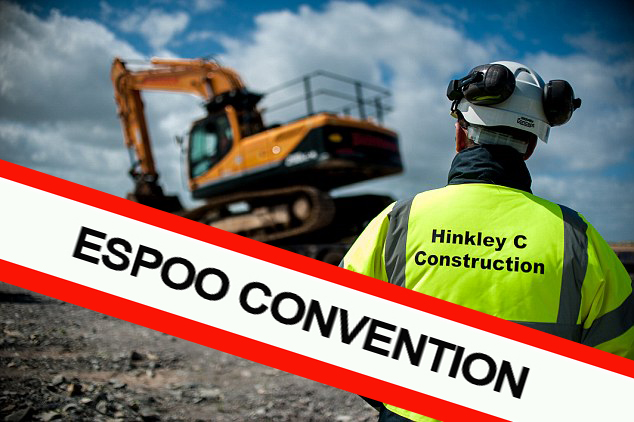 United Kingdom is not in compliance with the Espoo Convention

The Espoo Convention Compliance Committee[1] has closed its investigation on compliance by the United Kingdom in the case of Hinkley Point C. It found that the United Kingdom has not met its obligations to discuss the impact of a nuclear accident with the affected public in other countries. The findings from the Implementation Committee will be presented for endorsement to the next plenary session of Parties in Minsk in June 2017.

The Espoo Convention Implementation Committee was informed about the matter by the Green member of the German Federal Parliament Sylvia Kötting-Uhl and the NGO Friends of the Irish Environment in March 2013. They alleged that the UK failed to consult the public about the potential transboundary implications of the construction and operation of the proposed Hinkley Point C nuclear reactor.

Austria did participate in the procedure, after it had actively notified its interest under the Espoo Convention. It then showed with its own studies that there should be consultation because of the possibility of a severe accident that could lead to radioactive materials being spread by wind across Europe. At the request of the Espoo Convention Implementation Committee, the Netherlands and Norway also informed that transboundary impacts in their viewpoint could not be excluded. France, Belgium, Ireland, Denmark, Spain and Germany did not challenge the UK claim that transboundary impacts would be impossible.

In its findings, the Implementation Committee concluded that the United Kingdom should have notified countries other than only Ireland of the potential impacts of the Hinkley Point C project. It concluded on the basis of the Guidance on the Practical Application of the Espoo Convention, that “notification is necessary unless a significant adverse transboundary impact can be excluded.” It stated that the fact that the UK agreed to honour the request of notification by Austria means that these two Parties agreed that a likely significant environmental impact on Austrian territory could not be excluded. On the basis of the Austrian study, it noted that a severe accident could also cause significant adverse impact in Austria, France, Germany and Switzerland. It concluded that the originating party should take into account the worst-case scenario.

The Committee recommended that the UK should discuss what to do now with potentially affected Parties and that for all future nuclear power plant construction projects it will have to notify other countries for a transboundary Environmental Impact Assessment (EIA).

Jan Haverkamp, consultant for Greenpeace and board member of Nuclear Transparency Watch has followed the case closely: “These are important findings for nuclear decision processes in Europe. This confirms that the potential victims of severe accidents in new nuclear power stations have the right to participate in procedures. One of the lessons of the Fukushima catastrophe was that decision makers should think the unthinkable and any installation with a high concentration of highly radioactive material can lead to catastrophic emissions. Whether that is by unforeseen circumstances, acts of terror or war. These findings will help in reducing nuclear risks.”

Two complaints at the Aarhus Convention Compliance Committee for lack of international public participation in the Hinkley Point C project are still ongoing with findings expected before the end of the year.

The final conclusions are in the Annex of the report of the Committee’s 35th session (page 12 and further):
http://www.unece.org/fileadmin/DAM/env/documents/2015/EIA/IC/ece.mp.eia.ic.2016.2.advance_copy_for_typo_3.pdf

Find all related documentation on:
http://www.unece.org/environmental-policy/conventions/environmental-assessment/areas-of-work/review-of-compliance/committee-initiative/eiaicci5-united-kingdom.html

[1]  The UNECE Espoo Convention, named for the Finnish town in which it was signed in 1991, requires governments to provide an opportunity to the public in transboundary areas likely to be affected by a project to participate in the relevant Environmental Impact Assessment procedures regarding proposed activities. It must ensure that the opportunity provided to the public of potentially affected Parties is ‘equivalent to that provided to the public of the Party of origin’.